It has been fun creating these models and I look forward to the next fleet-set, at which point I intended to introduce balance changes to further distinguish the 3 sets from one another.

New start options has been added for the player to pick the number of starting systems, damage multiplier, mineral multiplier and starting bonus.

Note: If any bonus is selected every opponent receives one randomly.

Stellar Sovereigns had carriers from the start but their strike-crafts were pretty useless and mostly buggy. This update finally addresses these issues first by introducing 3 different crafts with different roles in mind. Each differs from one another by speed, agility and the kind of armament they have.

Interceptor crafts as the name implies are great at taking out enemy crafts like bombers, especially with their homing missile upgrade.

Bomber crafts can wreak havoc on capital vessels and stations and can punch through their shields with their torpedo upgrade.

Multirole crafts are all around capable vessels; their pulse laser cannon can rip other crafts apart, while its dual plasma blaster brings the hurt even to capital vessels, with added protection by its shield upgrade.

Secondly strike-crafts flying behaviour and attack run had been redone fixing many of their issues that previously made them ineffective. Their Area of Operation (AO) behaviour also had been worked on to take their intended roles into account.

The AO of a craft is a 300 unit radius area around its last waypoint, in which area it automatically engages hostile forces according to its preference based of its role.

For example interceptors will go primely after bombers at first, then other crafts and if nothing else then ships and stations.

This feature allows the player to just point its crafts to the general location of the enemy and have them pick their own targets.

Note: If a craft is critically damaged it tries to return to its motherships for repairs.

The carrier has launch icons for each kind of craft, which displays the number of launch ready/not ready crafts in their hangars.

The icons also serves as indicator for showing the progress bar of the most repaired or most constructed craft in the hangar.

Damaged crafts can land to be repaired and destroyed ones are rebuilt which takes longer but when done can be relaunched.

Note: Crafts under reconstruction cannot be launched until completed, but crafts being repaired can be at 70%.

The Hangar tech tree unlocks all 3 strike-crafts, the secondary weapons for interceptors and bombers as well as the shield of the multirole craft. 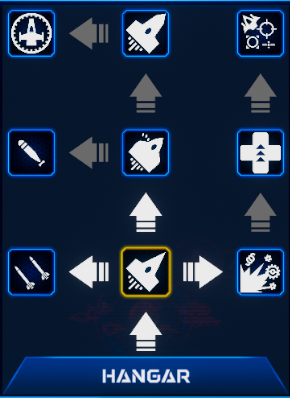 It also has a branch dedicated to upgrade every crafts' hit points, evasion and recovery time.

Missiles also been worked on in order to better their effectiveness in hitting their target. I noticed that interceptors are too often taking down missiles, which up until now could not be countered. 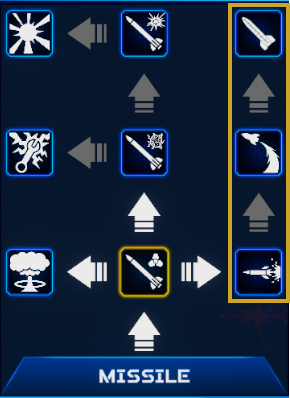 With this update an entire branch of the missile tech tree had been dedicated to improve their odds in hitting their target.

The two stage rocket upgrade boosts the missile's speed in the last stretch of approach, while evasive maneuvers distracts enemy targeting and armor plating increases the number of hits missiles can take.

Its been bugging me for awhile how capital ships move. An issue I found was their tendency to slide and not turn toward their destination if it was close.

Although I decided to keep the feature of sliding I made sure the ship also turns toward it at the same time and reduced the range of what it considers close.

To further enhance its look I also made ships tilt a bit when they are moving and turning based of the angle between their current heading and the destination.

With this update finally there is two ship sets the player gets to chose from. a major milestone for the game's development.

There is one more to come in short order and a few more features to wrap up this early access phase of the development.

It has been fun and hard work and an exhausting journey so far, but rewarding and full of excitements for the future.

Thank you all!
I hope you enjoy this new update!

Thank you very much!