Fixed research grants individually applying its bonus to each colony as opposed to to the total research bonus.

Fixed incompatible save file issue that not allowed valid saves to be loaded. 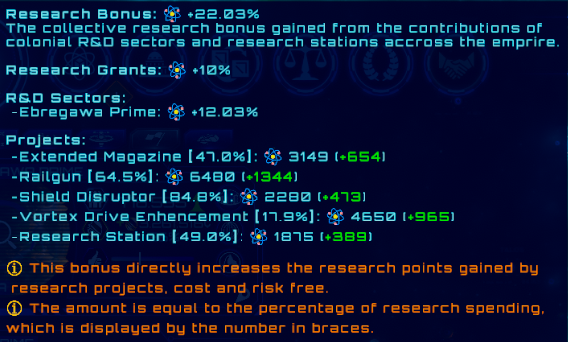 I have been playing and testing the import export menus and found that the UI was lacking clarity in regards to the amounts, so I upgraded it to display them using the credit format easier to recognise the higher amounts.

In fixing the issues with food stock amounts, I decided to display stock by the format of Excess/All, and under all the system considers produced + imported, which if is more then what is consumed by the population then that amount displayed by the excess column.

I found this arrangement the most straightforward to interpret and work with so the same principles been applied to the food production summary of the planet management menu.

Since I was on a roll of making things more clear, I changed how excess shipping capacity was displayed.

The new approach works out the quantity needed based of supply and demand, and if it has not got enough displays it as Lacking Capacity or if it has more then it needs then indicates it as Unutilized Capacity.

In watching AltRon's playthrough on YouTube I realized that up until now almost all of the planet traits were detrimental.

So I sprung into action and in the last two days have been working on new planet traits with the sole purpose of creating unique planets that should provide strategic benefits for the player.

First, I added the Capitol World traits to home worlds providing a random but positive boost to the starter worlds.

Note that upon capturing enemy worlds this trait will expire. 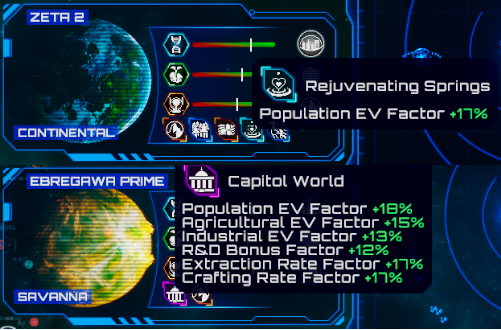 Beyond the Capitol World trait I created 20+ new traits each with the goal to boost one or more aspects of colonial development.

Also you may already noticed, that there are 3 new factors been integrated into planet traits:

Working on the new planet traits gave me an opportunity to add some new events some that comes from the presence of a planet trait and others that been triggered by circumstance.

A couple of the planet trait relevant events are can provide temporary boost like the Northern Lights from the presence of Aurora Borealis, or Shooting Stars from the Meteor Deposit trait, while some might cause devastation like a Meteor Strike.

Social events also been added some triggered periodically like State Fairs and Championships, or by circumstance like Inaugural Celebration following the crossing of a colonial milestone.

The work on the diplomacy features is ongoing, mostly focused on the UI and its ways to convey the state of relation between empires.

Also have implemented some of the diplomatic interactions like the displayed tribute demand action as well as research pact and started working on the trade system between empires.

But as this new updated clearly shows got side-tracked by planet traits and events.

So I better get back to track!
Until next time!